Division for the History of Croatian Music

Project: Networking through Music: Changes of Paradigms in the ‘Long 19th Century’ – from Luka Sorkočević to Franjo Ksaver Kuhač  (NETMUS19)

The Division for the History of Croatian Music was founded in 1980 under the name of the Institute for Musicological Research. Its task is the systematic exploration of all aspects of Croatian music within the European context, which makes it a unique institution in Croatia.

Seven researchers in this division work on three projects: The Collection, Cataloguing, and Processing of Written and Recorded Music and other Music Sources in Croatia, Eight Centuries of Spiritual Music in Croatia, and Croatian Musical Historiography before 1945.

The Division copublishes the Croatian musicological journal Arti musices, as well as numerous series of articles, catalogues of musical collections and music score editions. It also organizes national and international conferences, and carries out the mutual exchange of its publications with those of many institutions from Croatia and abroad.

The division has a rich library with more than 4,000 books, as well as music score editions, journals, music in recorded forms, and manuscript legacies. 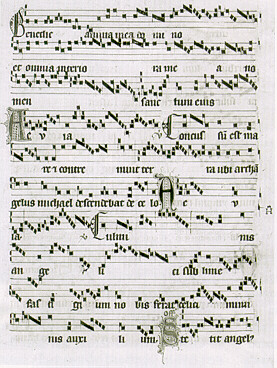 A 15th-century collection of chants from a Zagreb church, written on parchment, kept at the Academy

Institute for the History of Croatian Literature, Theater and Music in Zagreb