The Baška Tablet is one of the most famous Croatian monuments: the longest and richest information-wise among the earliest Croatian Glagolitic inscriptions, dating approximately 1100. In thirteen lines (and almost 100 words), the inscription had been carved into a white limestone tablet, the dimensions of which are 199 x 99.5 x 9 cm. The text speaks about the Croatian king Zvonimir having donated a piece of land to the Church of Sv. Lucija (St. Lucy) in Jurandvor near Baška on the island of Krk. The text of the Tablet had been written in the transitional type of the Glagolitic alphabet (turn from the rounded to the angular). The top part of the tablet has an ornamental edging in the form of vine tendrils, same as found on the ornamental parts of the ecclesiastic architecture along the Croatian coast in late 11th century as well as in 12th century. The Baška Tablet had originally been carved on the left pluteus (side) of the former altar septum (closure screen), separating the church monastic choir from the space reserved for the congregation in the nave of the Benedictine Church of Sv. Lucija in Jurandvor near Baška on the island of Krk.

In the inscription of the Baška Tablet, the national Croatian name is mentioned for the first time in the Croatian language, in king Zvonimir’s title itself (hence the name Zvonimir’s Tablet, or the Royal Tablet). This inscription is the fundamental text for any research on the Croatian language and literature. When it became obvious that the Church of Sv. Lucija was no longer a location adequate enough for keeping the Tablet and that the Tablet needed to be rescued from decay, saved for the “youngest generations”, because it “belonged to us all”, it was decided for the Tablet to be moved from Jurandvor to Zagreb. It was first to be thoroughly cleaned and then to receive an honorary place at the Palace of the then Yugoslav Academy of Sciences and Arts. At the break of dawn on 30th August 1934, in Krk, the Tablet was taken over by the linguist Stjepan Ivšić in the name of the Academy and by the liturgist and art historian Dragutin Kniewald in the name of the Conservation Office. It arrived to Zagreb on 31st August, by a freight transporting vehicle from Sušak. Ivšić wrote an inspired description of the transport of the Tablet, calling it the “golden tablet” of the Croatian language, our “precious stone” that was to be cherished by the Croats “as long as the Croatian people existed”. “Many admirers of our national valuables” would be arriving to the Academy; standing in front of it, “any true heart of ours would be overwhelmed” by the feeling of piety.

There is a rather rich and comprehensive bibliography on the Baška Tablet. The first person to point out its greatness was Petar Dorčić, a divinity student, and subsequently parish priest in Baška. This was in 1851. Since then, the Baška Tablet has been studied by Ivan Kukuljević Sakcinski, Franjo Rački, Ivan Črnčić, Vatroslav Jagić, Rudolf Strohal, Josip Hamm, Vjekoslav Štefanić, Eduard Hercigonja, Mateo Žagar, Lujo Margetić, and others, primarily Branko Fučić. The inscription was slowly and gradually deciphered, since in several places, the text of the inscription had been damaged. The nearest to the complete is considered the reading by Branko Fučić, who used the results of both his predecessors and his contemporaries and built upon them, adding his own corrections and interpretation. It is his reading that is to be found in the following text.
The Baška Tablet served furthermore as an inspiration for the following composers: Krešimir Fribec (cantata for soloists, choir and chamber orchestra, 1977); Stjepan Šulek (a capella composition for choir, 1980); and Ljuboslav Kuntarić. Furthermore, the following poets wrote poems about the Baška Tablet: Vladimir Nazor, Silvije Strahimir Kranjčević, and Josip Pupačić. 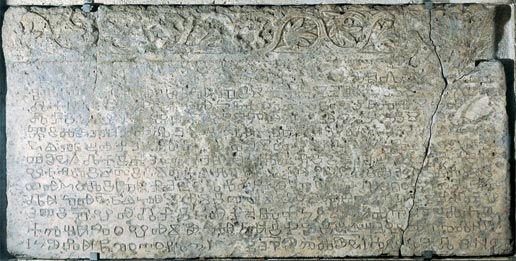 The inscription on the Baška Tablet
The transcription of the text in the Latin script (according to the reading by Branko Fučić):

An approximate translation of the Baška Tablet text into English:

In the name of the Father and of the Son and of the Holy Spirit. I, abbot Držiha, wrote this about the plot of land, which was given by Zvonimir, the Croatian King, in his time to St. Lucy (Sv. Lucija). The witnesses are: Desimir, Prefect of Krbava, Martin of Lika, Pribineg of Vinodol and Jakov on the island. If anyone should deny it, let him be cursed by the twelve Apostles and four Evangelists and St. Lucy. Amen. Let anyone who lives here pray God for them. I, abbot Dobrovit, have built this church with my nine brethren in the time of Prince Kosmat, who ruled the whole Country. In those days, Mikula was in Otočac with St. Lucy together.