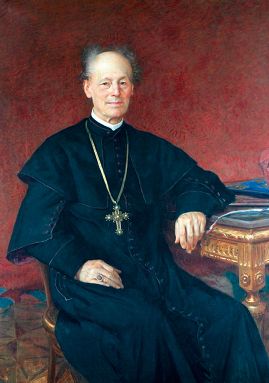 Josip Juraj Strossmayer, the bishop of the Bosnian and Srijem dioceses, resident in Đakovo, is one of the best-known Croats in the world: scholar and divine, politician and a bold national tribune, initiator and patron of the most prominent national cultural, educational and scientific projects in the more recent Croatian history; who had incorporated his entire mental and physical potential in ensuring welfare and progress for his people.

In Osijek, where he was born on 4th February 1815, he had completed his primary education and the then six years lasting secondary school. After having spent two years at the Preparatory Seminary in Đakovo and passed the maturity exam there (1831-1833), he continued his education as a theology student at the Faculty of Arts and Theology in Budapest; there, even before his 20th birthday, Strossmayer received the doctoral degree in philosophy (on 24th October 1834). As a cleric, he was appointed curate in Petrovaradin (on 16th February 1838), where he was in service for a relatively brief time period. Following, in June 1842, he received the doctoral degree in theology from the Augustineum in Vienna. In 1844, he began teaching mathematics and natural sciences at the Preparatory Seminary in Đakovo. Subsequently, in the autumn of 1847, Strossmayer was appointed court curate and dean of the Augustineum in Vienna as well as professor of canon law at the University of Vienna. It was in Vienna that Strossmayer had experienced the revolutionary year of 1848. Following, on 18th November 1849, he accepted the nomination for the bishop of the Bosnian and Srijem dioceses, resident in Đakovo. In the official documents as well as in public appearances, he was always described as the bishop of Bosnia and Srijem, because in this manner, two exceptionally important components of the Church in Croatia were interwoven: the Old Christian metropolitan centre in Sirmium and the Bosnian diocese, which was of great importance for the national history, since in the Middle Ages, it had represented the connective tissue of the Croatian civilisation and cultural heritage in its entirety.

On 23rd September 1851, Bishop Strossmayer was appointed Apostolic Administrator of the Principality of Serbia; on 31st May 1860, he joined the Greater Imperial Council; 1861-1862, he held the post of the District Prefect of Virovitica; 1861-1866, he was engaged in the founding of the Academy of Sciences and Arts in Zagreb; in 1867, he was in political exile; in the same year, he visited Paris and France; 1869-1870, he proved himself as excellent orator and speaker for the parliamentary minority at the First Vatican Council; 1869-1874, he was actively involved in the founding of the modern Croatian university in Zagreb; on 8th September 1876, he wrote the memoranda addressed to the Russian Government. On 1st October 1882, Strossmayer inaugurated and consecrated the majestic cathedral and dedicated it to the Unity of the Churches; in order to facilitate the building of it, he had visited the principal cities in the Hapsburg Monarchy and Germany – Prague, Munich, Berlin, etc. On 27th July 1888, he sent a telegram of congratulation to the dean of the University of Kiev on the occasion of the celebration of 900th anniversary of the christening of Russia, in which he spoke of the sublime pan-mundial task of Russia, which consequently led to the so-called Bjelovar Incident and yet another discord with Emperor Franz Josef.

The life of Josip Juraj Strossmayer reached its final point on 8th April 1905 in Đakovo, the centre of the diocese, at the head of which Strossmayer had been for 55 years.

At the very same parliamentary session, Strossmayer reminded the MPs of the fact that – in his own opinion – the prerequisite for the Academy of Sciences is a university. By the return of the constitutionality in 1860, the idea regarding the founding of a modern university in the Croatian capital began to mature; this university were to become the centre of the youth to be qualified and competent for a higher intellectual activity. On 11th March 1869, the Croatian Parliament voted for the legal article regarding the founding of the university in the Croatian capital, while the bishop of Đakovo, donating 50,000 florin, same as for the Academy, stimulated the action of public fund gathering for the opening of the modern Croatian University, which was – for opportunist reasons – initially named the Franz Josef I Royal University in Zagreb.

Thanks to his brilliant public appearances and speeches as the Croatian prelate at the First Vatican Council (1869-1870), Strossmayer gained very high reputation in the Catholic world and beyond; however, personal fame and popularity did not put a stop to his sincere striving for the Croatian people to be opened to others, primarily Slavonic peoples. Belonging to the people that had inherited elements of both the Western and the Eastern culture and civilisation as well as being Methodius’ successor at he post of the bishops of Sirmium, the bishop of Đakovo was a true pioneer of the modern ecumenical striving for achieving the unity and an open dialogue as well as for finding the elements leading to harmony and co-operation, differences and centuries-old conflicts notwithstanding. He saw his people as a true conciliator between the West and the East, qualified to convey to the latter party the achievements of the Western culture and civilisation.
The matchless benefactor and the cultural leader of the Croatian people, the apostle of peace, understanding and co-operation among people and peoples, the humanist and the visionary: Bishop Strossmayer was and remains one of the grandest builders of modern Croatia, highly respected far beyond its borders, and deserves therefore a place on one of the most prominent pages of the more recent Croatian history.