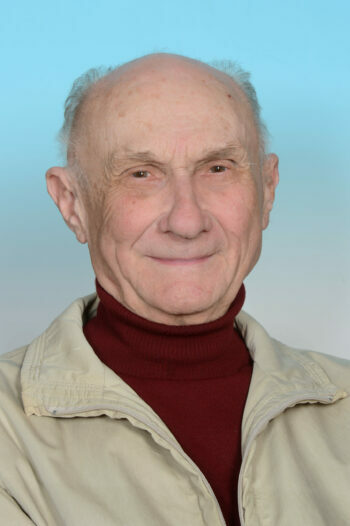 Viktor Žmegač was born on March 21, 1929 in Slatina, where he graduated from elementary school. He attended high school in Virovitica and Osijek. He studied Germanistics and Croatistics (Yugoslavs) at the Faculty of Humanities and Social Sciences, University of Zagreb (1954), and studied Germanistics and musicology in Göttingen (1952/53 and 1955/56). He earned his Doctorate in Science in 1959, and from 1971 until his retirement in 1999 he was a full professor of German literature at the Faculty of Humanities and Social Sciences in Zagreb.He occasionally visits foreign universities. Since 2002 he has been professor emeritus of the University of Zagreb.

He is a full member of the Croatian Academy of Sciences and Arts, a foreign member of the Saxony Academy in Leipzig and a member of the Scientific Society of Academia Europe in London. From 1985 to 2005, he was editor-in-chief of the magazine “The Art of words”. He is a member of the advice of foreign magazines “Germanistik” and “Text und Kontext”.

He has won numerous Croatian and foreign awards: the City of Zagreb Award in 1977. (for 1976) and 1998 (for 1997), the Nazor Awards in 1987 (for 1986), the Krleža Fund Awards in 1990 (for 1989) and 2007 (for 2006), then the Gundolf Award for Germanistics of the Academy of Language and Literature of the Federal Republic of Germany in 1987, the Herder Awards of the HSV Foundation and the University of Vienna in 1993, the Alexander von Humboldt Scientific Foundation Award 1993, “European Circle” Award of the Croatian Council of the European Movement 1996, National Lifetime Achievement Award 2000, Strossmayer Awards (together with Nikola Batušić and Zoran Kravar) 2002 (for 2001), Nazor Lifetime Achievement Awards 2004, Ina’s Award for promoting Croatian culture in the world in 2005, the Matica Hrvatska Award for Science “Oton Kučera” and the CASA “Josip Juraj Strossmayer” Award in 2006 (for 2005), Pula Book Fair Awards “Cyclops” 2007, 2009, 2010, 2011, Bavarian Academy of Arts Awards in 2009 and the “Josip Andreis” Award of the Croatian Composers’ Association. He was awarded the Great Cross for the merits of the Federal Republic of Germany in 1988.