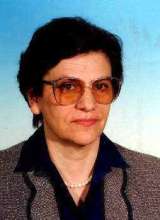 Prof. Dr. Alica Wertheimer Baletić was born on 10 December 1937 in Vukovar, where she finished her primary and secondary education. She graduated in 1960 at the Faculty of Economics and Business in Zagreb, received her Master’s degree in 1964, and her Doctor’s degree in 1965 from the same Faculty. She spent the academic year 1965/66 at the University of Chicago, USA. At the Faculty of Economics and Business in Zagreb, she was first elected lecturer in 1961, following assistant professor in 1966, subsequently promoted to the post of associate professor in 1972, and finally rounded her career as full professor of Demography in 1976. Between 1968 and 1972, she chaired the Division of Demography at the Institute for Social Research of the University of Zagreb; between 1985 and 1989, she was active as one of the directors of the international postgraduate studies programme entitled Demographic Trends and Population Policies at the Interuniversity Centre of the University of Zagreb in Dubrovnik. Prof. Dr. Wertheimer Baletić was, inter alia, the chair of the Scientific Section of Demography of the Yugoslav Statistic Societies’ Union and the head of the Chair of Demography at the Faculty of Economics and Business in Zagreb. She participated in many conferences and scientific symposia on population issues both in Croatia and abroad (London, Liège, Windsor (Canada), Prague, Bratislava, Kiev, Helsinki, Florence, Jüvaskyla, Geneva, New York, etc.).
Prof. Dr. Alica Wertheimer Baletić has written 17 books and monographs, among which most worthy of mention are the following: Stanovništvo SR Hrvatske – studije (The Population of the Socialist Republic of Croatia – Studies), 1971; Ekonomska aktivnost stanovništva – demografski aspekt (The Economic Activity of the Population – the Demographic Aspect), 1978; Demografija – stanovništvo i ekonomski razvitak (Demography – Population and Economic Development), 1972 and 1983; Stanovništvo Vukovara i vukovarskog kraja (The Population of Vukovar and the Vukovar Surroundings), 1993; and Stanovništvo i razvoj (Population and Development), 1999. She has written 170 articles, studies, proceedings’ and other papers, and numerous scientific papers. She has received the Mijo Mirković Acknowledgement (seven times at the Faculty of Economics and Business in Zagreb); the City of Zagreb Award (together with her associates) in 1977; the Božidar Adžija Republic Award for the contribution to the development of demography in 1983; the National Award for Life Achievements in the field of Social Sciences in 2000; the Annales Pilar Acknowledgement for the contribution to the development of demography in Croatia in 2004. She was moreover twice awarded the Medal of the Order of Danica Hrvatska: in 1995, the Ruđer Bošković Medal, and in 1996, the Katarina Zrinska Medal. Prof. Dr. Wertheimer Baletić is a member of world demographic associations (International Union for the Scientific Study of Population i European Association for Population Studies). She was active as member of editorial staffs and councils of many journals (European Population Journal; Stanovništvo / Population; Statistička revija / Statistic Revue; Encyclopaedia moderna; Rad / Monographs – the Croatian Academy of Sciences and Arts; Suvremeni ekonomski problemi / Contemporary Economic Issues – the Croatian Academy of Sciences and Arts; Acta oeconomico-historica; Sociologija sela / Sociology of the Village; Ekonomski pregled / Economic Review; Zbornik radova Ekonomskog fakulteta u Rijeci / Proceedings of the Faculty of Economics and Business in Rijeka, etc.). As a member of the Croatian delegation at the European Conference on Population in Geneva in 1993, she submitted the national report on the population of the Republic of Croatia; furthermore, she was a member of the Croatian delegation at the preparatory meeting for drawing up the final document of the UN Conference on Population and Development in Cairo, held in New York, 4-23 April 1994. As a demography expert, she was a representative of the Republic of Croatia at UN Commission on Population and Developement between 1998 and 2002; at the 33rd Committee Session, held 27-31 March 2000, she was elected Committee Vice-President for one mandatory period.
Prof. Dr. Wertheimer Baletić first became an associate member of the Croatian Academy of Sciences and Arts in 1986, and was subsequently elected full member in 1992. Between 1995 and 2000, she held the post of the Secretary of the Academy’s Department of Social Sciences, whilst between 2001 and 2003, she was a member of the Academy’s Presidency. Since 2004, she has held the post of one of two Academy’s Vice-Presidents. Prof. Dr. Alica Wertheimer Baletić was elected member of the Académie Européene des Sciences, des Arts et des Lettres in Paris in October 2004.