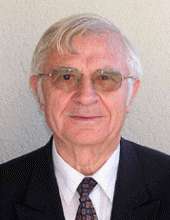 Božo Udovičić, Croatian electrical engineer was born in Rašeljke, BiH, September, 26 1933. Graduated (1959) and Doctorate (1974) from the Faculty of Electrical Engineering in Zagreb. From 1959 to 1990 he worked at the Institute of Electric Power Company in Zagreb. In 1977 started teaching at the Faculty of Electrical Engineering, Mechanical Engineering and Naval Architecture in Split, where he was elected full professor in 1983.
In his supplementary work, he taught several courses at the Faculty of Electrical Engineering in Zagreb and Osijek. His areas of interest were electricity and complex energy, environmental protection and the political and social situation in society. He is a co-founder of the world-famous Zagreb Energy School, together with Hrvoje Požar, F.C.A. He served as Minister for Energy and Industry in the First and Second Governments of the Republic of Croatia (1990–91), and then until his retirement (1998) was the director of the energy and industry sector of the Chamber of Commerce. Elected as a full member of the CASA in 1997.