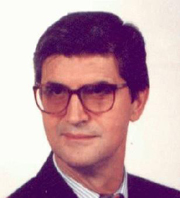 Professor Nenad Trinajstić was born on October 26, 1936 in Zagreb, where he finished elementary school (1951) and high school (1956). He graduated from the Department of Chemical Technology of the Technological Faculty in Zagreb in 1960. He won his master’s degree in 1966; his master-thesis supervisor was Professor Milan Randic. He got his doctor’s degree from the Faculty of Science and Mathematics of the University of Zagreb in 1967. His doctoral thesis, entitled “Electronic Structure of Some Polyatomic Molecules”, was the first Croatian dissertation in quantum chemistry.

After receiving his BSc. Chem. Techn. degree, he was employed by the Pliva Research Institute (1960–1961). He moved to the Rugjer Boskovic Institute (RBI) in early 1962, where he spent all his working life. For many years he was the head of the Theoretical Chemistry Group in the Department of Physical Chemistry. He retired at the end of 2001. In 1992 he was elected for a full membership of the Croatian Academy of Sciences and Arts. He was also a member of the International Academy of Mathematical Chemistry from its foundation in 2005, the same year he became emeritus scientist at the Rudjer Boskovic Institute.

He published more than 500 scientific papers, few hundreds of professional articles, and 12 books, among which is the most famous Chemical Graph Theory (CRC Press, 2nd ed. 1992). He is one of the most cited Croatian chemists, with h-factor 59.

His professional interest was in the fields of quantum-chemical and mathematical methods in chemistry. In mathematical chemistry, he worked on the development and application of graph theory and topology to chemistry of conjugated systems. He was also involved in the development of molecular descriptors known as topological indices (Zagreb indices, Harary index, various distance indices, detour index, etc.) and in the development of quantitative relations between the structure, properties and activities of organic molecules and biomolecules. His contributions
in the fields of chemical graph theory and the graph-based computer chemistry made him well known as one of the pioneers in these branches of mathematical chemistry.

Professor Trinajstić will be fondly remembered by all his friends and colleagues.