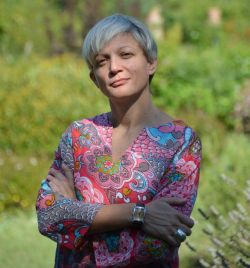 Zrinka Stahuljak was born in Zagreb in 1969, where she graduated from the Classical Gymnasium. In 1987, she enrolled at the Faculty of Humanities and Social Sciences in Zagreb to study English language and literature and study French language and literature. That choice also steered her later path. After her involvement in the Homeland War as an interpreter and translator on war lines, first as a volunteer for the Croatian Liaison Office, and then for a short time as an employee of the Croatian Government, she graduated from the Faculty of Humanities and Social Sciences in early 1993. In the summer of 1993, she went on a master’s degree from French to the University of the State of Kansas. Two years later, she began her Doctorate in Medieval French Literature at Emory University in Atlanta. She received her Doctorate in 2000. In the fall of 2001, she began teaching at Boston University, and in 2005 she took a job at the prestigious University of California in Los Angeles, where since 2013 she has been active as a full professor in parallel at the Department of French and Francophone Studies and at the Department of Comparative Literature at the University of California, Los Angeles (UCLA). Since July 2019, she has been director of the Center for Medieval and Renaissance Studies (CMRS) at UCLA, and also the publisher (Series Editor) of the Anamnèses: Médiéval/Contemporain (Éditions Macula, Paris).

She devoted most of her research to the analysis of Old French and other medieval literary and non-literary works, not only from the point of view of the history of literature, but also starting from what these texts can tell us about medieval society, its structure, norms and functioning, and starting from how certain medieval phenomena were reflected in the latter periods and possibly influenced social development. She often had to approach medieval texts interdisciplinaryly, so she collaborated with experts in history, art history, medicine, sociology, etc.

She also collaborated with the J. Paul Getty Museum in Los Angeles. In June 2018, as a visiting professor, she gave a lecture cycle Les Fixeurs au Moyen Âge at the Collège de France. She received multiple scholarships for scientific training (Guggenheim Scholarship, 2016; Fulbright, 2013; Institute for Advanced Study, Princeton, 2005-2006), and was regularly invited as a visiting professor to distinguish universities in Europe and America (Chaire des Amériques, Université Rennes 2, France, 2016; International Visiting Fellow, Warwick University, United Kingdom, 2019; Professor, University of Iceland-Reykjavik, Iceland, 2022). She has participated in numerous other projects in Europe, e.g. as co-director of the GLOHUM – Global Humanisms project, 300-1600, together with Prof. Dr. Miljenko Jurković, within the Program of Scientific Cooperation with Croatian Scientists in the Diaspora.

She was elected as a corresponding member of the Croatian Academy of Sciences and Arts in 2020.