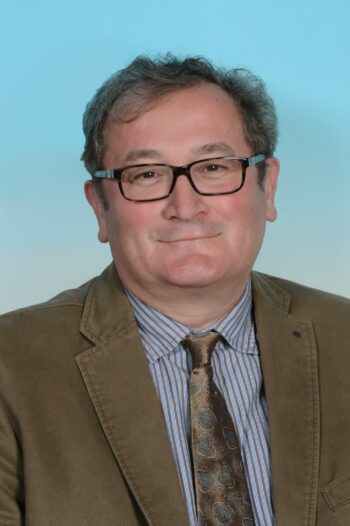 Darko Novaković was born on January 14, 1953. He graduated (1975) and received his doctorate (1981) from the Faculty of Humanities and Social Sciences in Zagreb, where he has been a full professor since 1990, and since 1992 he has been headed of the Department of Latin Language and Literature. He deals with ancient literary theory, rhetoric, teachings about style, ancient novel (especially Greek), grotesque comedy in ancient texts. In the field of classical philology published several bilingual editions of Greek and Roman authors. In the field of Croatian Latinism, he warned about unknown handwritten texts by Filip Zadranin, Juraj Šižgorić, Jerolim Bartučević, Benedikt Kotruljević, Didak Pir, Ivan Gučetić, Antun, Mihovil and Faust Vrančić, etc.

In London, he discovered Marulić’s CV of St. Peter. Jerome (Vita diui Hieronymi), and in Glasgow codex with unknown Marulić Latin songs (Epigrammata) and staged their first editions.  Participated in numerous scientific conferences in Croatia and abroad (Rome, Udine, Assisi, Ferrara, Chianciano, Bonn, etc.). He co-founded “Latina et Graeca” magazine. He is a member of the editorial board of Marko Marulić’s Collected Works. He was the editor for Croatian Latinism and classical literature in the Croatian Encyclopedia (1999-2009), editor of the collection Greek and Roman classics of Matica Hrvatska (1998-2007). He was chairman of the Parent Commission for the Field of Humanities, Linguistics and Literature Sciences (1999-2005), President of the Board of Directors of the National and University Library (2001-2005).

He received the annual HAZU Award for Philological Sciences in 2001, followed by the ‘Judita’ award of the Croatian Writers’ Association in 2016; Annual Awards of the Faculty of Humanities and Social Sciences 2000, 2001, 2005; annual translation awards “Iso Velikanović” 2006. He is a member of the Society for the Promotion of Roman Studies in London, Accademia Properziana del Subasio, international commission for Thesaurus linguae Latinae at the Bavarian Academy of Sciences (Internationale Thesaurus-Kommission); From 1999 to 2010, he was a member of the Board of Directors of Humanities in the European Research Area, a member of the expert committee for classical studies of the European Reference Index for the Humanities, Expert Panel for Classical Studies. He was elected associate member of the Croatian Academy of Sciences and Arts in 2002, and as a full member in 2008. Since 2019, he has been secretary of the Department of Philological Sciences.