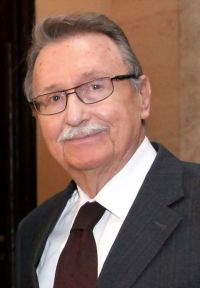 Velimir Neidhardt, President of the Croatian Academy of Sciences and Arts, was born in Zagreb on 7 October 1943. He graduated from the Faculty of Architecture, University of Zagreb, in 1967. Subsequently, 1968–1970, he professionally and artistically specialized at Drago Galić’s Master Workshop, where he began his successful participation in public competitions covering the domains of urban planning and architecture. Until 1974, he worked at the Medveščak Architectural Bureau in Zagreb. Parallel with this, in 1972, he enrolled master’s study program at the Faculty of Architecture, University of Zagreb. He earned his master’s degree in 1978, with the thesis entitled Razvoj modela u znanstvenoj metodi urbanističkog planiranja (Development Models in the Scientific Method of Urban Planning). In the meantime, Neidhardt spent the period 1974–1976 in the USA. Upon nomination by the Croatian Academy of Sciences and Arts, he spent the academic year 1974–1975 as a Zlatko and Joyce Baloković Scholar at Harvard University, Cambridge MA, where he participated in the M.I.T. with one third of the program. During the following year, 1975–1976, he specialized at the Skidmore, Owings and Merrill Architectural Design Studios in Chicago. Upon return to Croatia, he joined the Croatian Urban Planning Institute in Zagreb. He developed and applied URBAN, the first computer language for the purposes of spatial and urban planning in Croatia. He earned his Ph.D. in 1990 from the Faculty of Architecture, Zagreb University. The title of his dissertation was Antroposocijalni faktor u teorijskom pristupu arhitektonskom i urbanističkom projektiranju (Anthroposocial Factor in the Theoretical Approach to Architectural and Urban Planning Design). He has been awarded many prizes for his oeuvre, which includes approximately two hundred studies, plans and projects. Among them, the following are particularly noteworthy: the Vladimir Nazor Award of the Ministry of Culture for best achievements in architecture and urban planning in 1989 and 1995; the Viktor Kovačić Award of Croatian Architects’ Association for the best architectural achievement in 1979; the City of Zagreb Award for exceptional contribution to Croatian architecture – for achievements contributing originally and creatively to the image of modern Zagreb – in 2001. He was decorated with the Order of Croatian Star with the Image of Marko Marulić in 2009. On the global scale, his greatest achievement in architecture was winning (together with B. Kincl and J. Radić) international architectural competition for the new passenger terminal at the Zagreb Airport in 2008. This Croatian design achieved the highest marks for all its elements, and left thereby the global elite (N. Foster, Z. Hadid and others) behind. Neidhardt had designed and supervised the construction of the new terminal, which was opened for the public in 2017. In the same year, this architectural project won the American Architecture Award. Neidhardt’s other major competition project designs had also won first prizes, and were subsequently realized, for instance: Multipurpose City Centre I in Banja Luka, Bosnia and Herzegovina; National and University Library building in Zagreb (in co-authorship); and INA Petroleum Company Headquarters office building in Zagreb. Furthermore, he authored Croatia Insurance Company Headquarters building in Zagreb. After a 35-year teaching career at the Zagreb Faculty of Architecture, eventually as tenured full professor, Neidhardt has a strong argument to emphasize the inseparability of teaching and practicing architecture. The confirmation thereof was his engagement in establishing a professional chamber of architects, as well as launching his own architectural design firm – NEIDHARDT arhitekti Ltd. Approximately one hundred scientific, research and professional papers authored by Velimir Neidhardt have been continually published since 1969, both in national and international journals. There have been nearly equally as many surveys published on his oeuvre, and numerous lectures and speeches held at national and international symposia. His book entitled Čovjek u prostoru (Man in the Environment), published in 1997, sets the anthroposocial method of design based on the complementarity of science and art. He has been exhibiting since 1970, having taken part around thirty times in all the relevant architectural group exhibitions not only in Croatia, but also abroad, where his most noteworthy presence was at the 19th Triennial in Milan, Italy. He mounted his solo exhibition in 2001 at the Museum of Architecture of the Croatian Academy of Sciences and Arts. The monograph on his architectural oeuvre was presented on this occasion as well. The bibliography including papers on this author numbers around one hundred and fifty units. He has continually taken active part in the public- and society-related work of many institutions and forums. He is a long-standing Deserving Member and former President (1995–1999) of Croatian Architects’ Association. For his exceptional merits, he was elected Honorary Member of Zagreb Architects’ Society. He has been International Associate of the American Institute of Architects since 1996. In 1980, he became Associate Member of the Croatian Academy of Sciences and Arts. Subsequently, in 1990, he was promoted to Extraordinary Member thereof. In follow-up, he was elected Fellow of the Croatian Academy of Sciences and Arts in 1991, and held the position of Academy Vice-President 2011–2018. As of 2019, Velimir Neidhardt is the current President of the Croatian Academy of Sciences and Arts. He is furthermore head of the Academy’s Cabinet of Architecture and Urban Planning – Fine Arts Archives. In the period 1998–2018, he was chair of the Board of Trustees of the Foundation of the Croatian Academy of Sciences and Arts. Together with two other Fellows of the Croatian Academy of Sciences and Arts, M. Begović and A. Vulin, Neidhardt reconstructed the building that presently houses the Library of the Croatian Academy of Sciences and Arts. The latest architectural achievement, project for Congress centre with a large conference hall for the purposes of the Croatian Presidency of the Council of the European Union (1/1 – 30/6/2020), was realised in 2019 in the lateral part of the National and University Library in Zagreb. In 2015, he became Corresponding Member of the Slovenian Academy of Sciences and Arts. In 2019 he was elected Fellow of the World Academy of Art and Science. He concluded his course entitled „Office and Commercial Buildings“ at the Faculty of Architecture with twenty-nine video lectures with free access on YouTube, whereas as professor emeritus, he participates in doctoral program entitled „Architectural Study of Modernity“.