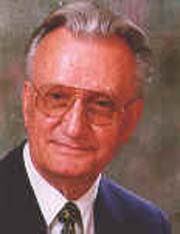 Born in Karlovac, Croatia on 17th January 1929.; received his B. Sc. in Mech. Engineering in 1954. from the Technical Faculty the University of Zagreb. From 1954. to 1964. worked in machine tools factory “Prvomajska” as: Head of heat treatment dept.; Head of tool-room dept.; Assistant to technical manager; Technical manager (1961.-1964.) of the factory (3000 employees). During these ten years he was sent 4 times for specialisation in relevant factories and institutes in Germany and Belgium. From 1964. to 1968. he was counsellor for metal-working industry at the Chamber of Commerce of Zagreb.

In 1968. he was elected as Lecturer for Heat Treatment at the Faculty of Mech. Engineering in Zagreb, where he established a well equipped Heat Treatment Laboratory, and introduced some new heat treatment technologies (Salt bath nitriding process “Tenifer”; Vacuum heat treatment of alloyed steels; Gas nitriding process “Nitroc”), not existent until then in the country.

In 1975. he received his Ph. D. in materials science from the University of Zagreb. In 1976. he became Associate professor and in 1982. Full professor and Head of the Chair for Heat Treatment and Surface Engineering, until his retirement in 1999. During his work at the faculty he served, between 1971. and 1990. 9 times on short and medium-term assignments as UNDP expert for heat treatment in: Israel, India, Egypt, Turkey, Bangladesh and Pakistan.

From 1989. he is technical adviser of Research Department of IPSEN INTERNATIONAL GmbH, Kleve, Germany, one of the world biggest companies producing heat treatment equipment. He holds 50% of the common patent (Edenhofer, Liščić, Dominik): “Flexible adaptable quenching”, European patent office, Application No. 93106451.3. In 1992. he spent two months as visiting professor at the Department of Mech. Engineering, the University of Cincinnati, Ohio (USA):

During many years of cooperation with domestic industry, as well as with industries in countries where he served as UNDP expert, he has drawn up plans for 18 small and medium-sized heat reatment workshops. As a result of his cooperation with a local manufacturer of heat treatment equipment in Zagreb, 1986. an original prototype of the salt bath furnace for martempering and austempering was developed.

His educational activity at the faculty and generally in his own country, as well as in different countries where he served as UNDP expert, was devoted entirely to heat treatment of metals. His scientific and research activity was first of all aimed at investigating and improving the technology of the quenching process. His main scientific achievement is the invention of the Temperature Gradient Method for quenching intensity measuring, recording and evaluation. This workshop designed, computer-aided method enables to record the quenching intensity for different quenchants and quenching conditions, through the heat flux density on the surface of a special probe, which was developed in cooperation with American company NANMAC, and is known in professional literature as the LISCIC/NANMAC probe. The relevant computer program enables also to calculate the cooling curves at every arbitrary point of the round bar cross-section, as well as to predict the resulting microstructure and hardness after quenching. The method itself has been reffered to in professional journals in: Germany, USA, England, Ukraine and partially or in full described in 5 monographs. Based on this method the company IPSEN INTERNATIONAL GmbH, Kleve, Germany has in 1995., as the first in the world, brought to the market the “Flux control”, a computer-aided system for measuring, recording and control of the quenching intensity during high pressure gas quenching in vacuum furnaces. The main feature of the system is the IPSEN-LISCIC sensor.

Another of his important scientific achievements is the cognition that PAG-polymer solutions of high concentration may be used for Controllable Delayed Quenching (CDQ), provided adequate steel hardenability and cross-section size of the workpiece are involved. The CDQ technology can substantially enhance the depth of hardening. Recent investigation, he is conducting in cooperation with the Institut für Werkstofftechnik (IWT), Bremen, Germany is aimed. to control heat extraction during high pressure gas quenching. His international reputation as researcher in the field of quenching technology may be judged by his engagement as:

During employment at the faculty served as UNDP Expert for heat treatment with different UN agencies (ILO, UNIDO, ESCAP) in the following countries:

A total of 119 papers, review articles and chapters in books.

As university professor and head of the Chair for Heat Treatment and Surface Engineering, he has introduced and taught many undergraduate and postgraduate courses in the field of Heat Treatment and Surface Engineering. He was mentor for: 30 diploma degree holders (B. Sc.), 5 postgraduate students (M. Sc.) and 2 doctoral theses (Ph. D.) in material science.

During his activity as UNDP expert he has organized and taught courses and seminars on heat treatment in: Israel, Turkey, India and Pakistan. He has given more than 60 public lectures in 13 different countries, among them 9 invited lectures.