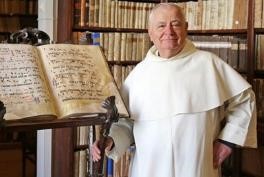 Stjepan Krasić, a Croatian historian and Dominican, was born on October 6, 1938 in Čitluk near Mostar, Bosnia and Herzegovina. He attended philosophical and theological studies in Dubrovnik and Zagreb, where he was ordained in 1965. He continued his studies in theology in Rome, where he received his Doctorate in Historical Dissertation in Latin (Congregatio Ragusina Ord. The praed. 1487-1550 ), published 1972 by the Historical Institute of the Dominican Order in Rome. At the Paleographic and Diplomatic School in the Vatican, he graduated in ancillary historical sciences (paleography, archivist and diplomatics). At the Pontifical University, Gregoriani received his Doctorate in Church History in 1985 with a dissertation in Italian on the Dubrovnik polyhistor and diplomat Stjepan Grad: Stefano Gradić (1613-1683). Diplomatico e Prefetto della Biblioteca Apostolica Vaticana.

In 1997 he was elected as a correspondent member of the Croatian Academy of Sciences and Arts in the Department of Social Sciences.