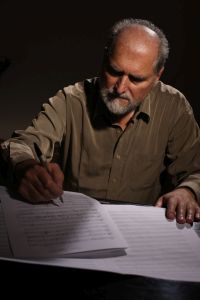 Davorin Kempf, composer, musicologist and music pedagogue, was born in 1947, in Virje, Croatia. He graduated from Gymnasium in Požega and from the „Franjo Kuhač” Secondary Music School in Osijek, in 1966. At the Academy of Music in Zagreb he graduated piano (Prof. Stjepan Radić) in 1971, conducting (Prof. Igor Gjadrov) in 1972, and composition (Prof. Stjepan Šulek) in 1973. As a grantee of the German Academic Exchange Service he continued his studies in composition at the Hochschule für Musik und darstellende Kunst in Stuttgart (Prof. Milko Kelemen, Prof. Dr. Erhard Karkoschka) during the 1975-76 academic year, and at the Musikhochschule Köln (Prof. Mauricio Kagel, Prof. Joachim Blume, Prof. Hans – Ulrich Humpert) during the 1976-77 academic year. As a Fulbright grantee he completed graduate study in composition at the University of Iowa, Iowa City, U.S.A. (Prof. Dr. Donald Martin Jenni, Prof. D.M.A. Kenneth Gaburo) in 1990, receiving a Master of Arts (Music) degree. In 1994 and 1997 he carried out his short-term studies/researches as a grantee of the German Academic Exchange Service at Technische Universität Berlin, Elektronisches Studio (Dipl. Ing. Folkmar Hein). He earned his Ph.D. degree at Freie Universität Berlin, Fachbereich Philosophie und Geisteswissenschaften (Prof. Dr. Albrecht Riethmüller) in 2006.

From 1995 untill the retirement in 2017 he worked as a full professor at the University of Zagreb Academy of Music in the Department of composition and theory of music. (In 2000 he became a tenure track full professor.) From 1996 to 2004 he was the Artistic Manager of the Požega Organ Evenings. During the seasons 2012-13 and 2013-14 he was holding the status of a Composer-in-Residence of the Zagreb Philharmonic. In 2013 and 2014 he was Chairman of the Jury of the 2nd and 3rd International Composers’ Competitions New Note, Samobor, Croatia. In 2017 and 2018 he was Chairman of the Ministry of Culture of the Republic of Croatia Expertly Commission for Stimulation of Croatian Musical Creation. Also, he was a member of the Jury (piano) of the Croatian Competition of Young Musical Artists „Boris Papandopulo“ that was held in Zagreb in 2017.

His compositions have been performed at concerts and music festivals in Croatia, Germany, Austria, Switzerland, Italy, Portugal, Netherlands, Czech Republic, Slovakia, Slovenia, Serbia, Bosnia and Herzegovina, France, England, Ireland, Belgium, USA, Mexico, Canada, Japan, Russia, Ukraine, etc., and over various radio and television broadcasts. His composition Mariposa de luz / Butterfly of Light was the obligatory piece by Croatian composer at the 5th EPTA „Svetislav Stančić“ International Piano Competition in Zagreb, in 2014. In 2020 The University of Iowa published on its website an interview with him including a video recording of Adela Liculescu´s interpretation of Davorin Kempf´s piano miniature Mariposa de luz at the 2018 Honens International Piano Competition in Berlin: https://international.uiowa.edu/news/university-iowa-alumnus-reflects-his-career-professor-and-award-winning-composer .

His texts on music have been published in music and musicological magazines (International Review of the Aesthetics and Sociology of Music, Arti musices) and in the Matrix Croatica newspaper for literature, art and science „Vijenac”. His article What is Symmetry in Music? (IRASM, Vol. 27, No. 2, Zagreb 1996) was published (translated into Italian) in the book Simmetrie fra Matematica e Musica, Traduzioni di Federico Favali & Maria Mannone, Palermo University Press, in 2020. He has created numerous music broadcasts for Croatian Radio. He has given lectures on music at the Ruđer Bošković Institute in Zagreb (1992, 2003), at the Goethe Institute in Zagreb (2000), at the Scientific Platform of Matrix Croatica in Zagreb (2003), at  the International Symposium CroArtScia2011, Symmetry: Art&Science, in Zagreb, at universities in Iowa City (1984, 1991), Graz (1994), Ljubljana (2000, 2002, 2005) and Maribor (2007), at the 3rd International Week, University of Ljubljana Academy of Music, Department of composition and music theory (2016), as well as at the ABI/IBC international congresses in San Francisco (1996), Dublin (2004) and Washington, D.C. (2007).

He is the recipient of the Josip Štolcer Slavenski Annual Award (1986), the Vladimir Nazor Annual Award (1986 and 2012), the Porin discographic award (2011), the Boris Papandopulo Award of the Croatian Society of Composers (2014), the Porin Lifetime Achievement Award (2016), the Croatian Academy of Sciences and Arts Award (2016) for the highest scientific and artistc achievements in the Republic of Croatia in the field of musical art for 2015, the City of Požega Lifetime Achievement Award (2017); the International Award of Recognition (1991) and the Twenty-Five Year Achievement Award (1992) both presented by the American Biographical Institute.

He initiated the foundation of the Požega Branch of the Croatian Paneuropean Union and was its first president (1998-2001).

Selected bibliography on Davorin Kempf and his work: