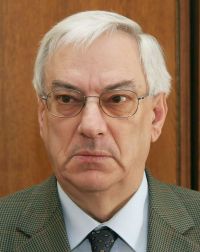 Slobodan Kaštela was born in Novigrad ( Dalmatia ) on 13 September 1941 . Since 1946, he has been living in Zagreb , where he finished elementary school, grammar school and the study of law at the Faculty of Law, from which he received his bachelor’s degree in 1964.

Active as fellow at the Faculty of Transport and Traffic Engineering since 1993, currently holding the following posts:

In addition to active teaching, since 1999, S. Kaštela has been permanently involved as researcher in the research projects of the Ministry of Science, Education and Sports.

S. Kaštela has been awarded two medals and several other certificates of merit for his active work in the society.

In performing the duties of the Secretary of the CroatianAcademyof Sciences and Arts, S. Kaštela has proven himself to be an excellent legal mind as well as a successful organiser and co-ordinator of the Academy’s extremely complex tasks; hence, the Presidency of the Academy chose to repeatedly appoint him to the same post seven times.

In 1998, students’ textbook entitled Osnove zračnog prava (The ABCs of Air Law) was published in co-authorship for the needs of the Faculty of Transport and Traffic Engineering. The part of the textbook addressing air law was written by S. Kaštela. Furthermore, in 2001, students’ textbook entitled Zračno prometno pravo (Air Traffic Law) and written by a single author, S. Kaštela, was published. This textbook is intended for both undergraduate and graduate students. Moreover, in 2005, the book entitledFran Vrbanić Ekonomski spisi (Fran Vrbanić Economic Writings), for which S. Kaštela had written an extensive study enriched by footnotes and bibliography, was published.

In addition to the already mentioned books and textbooks, by the end of 2005, S. Kaštela has published 26 scientific papers and several dozens research papers. Being active for a number of years at the Parliamentary Council for Tourism and Traffic, he participated in the drafting of Croatia’s first Hospitality and Tourism Sectors Act (published in the Narodne novine – Official Journal), for which Act he, on two occasions, wrote expert commentaries.

As President of the Organisation Committee, S. Kaštela was the head organiser of a major international scientific symposium entitled Traffic Links Between Croatia and the European Countries Encouraging the Social, Economic and Cultural Development of the Northwest Croatia, which was held in Varaždin in November 2005.

He reviewed two books and three textbooks as well as several projects referred (for funding reasons) to the Ministry of Science and Technology. He furthermore either edited or co-edited eight books that were published by the CroatianAcademyof Sciences and Arts.

Slobodan Kaštela is an associate of the Miroslav Krleža Lexicographic Institute.