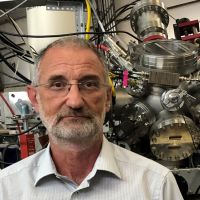 Milko Jakšić is a senior scientist at the Ruđer Bošković Institute (RBI), Zagreb, the largest research institute in natural sciences of Croatia. During the last twenty years he is leading the Laboratory for ion beam interactions of the Experimental physics division, that operates accelerator infrastructure based on two electrostatic tandem ion beam accelerators. A wide range of experimental end stations are dedicated to ion beam analysis and ion beam materials modification applications. Currently, these are accessible internationally through different contracts and agreements with IAEA, EU projects and CERIC-ERIC consortium. The main research field of Milko Jakšić is development and applications of ion beam analysis as well as materials modification techniques based on MeV ion beams. He has published more than 250 research papers, cited more than 3000 times. His current specific interests include development of techniques using focussed ion beams, in particular those based on single ions including deterministic ion implantation. Among them it is also an IBIC – ion beam induced charge, through which applications RBI group became widely recognized. As a conference chair or a co-chair, he organized several most important international conferences in the field of ion beam applications and has also been a leader or associate of many EU and IAEA funded projects. In a number of occasions, he collaborated with IAEA as an expert, as a supervisor of trainees, or as a local organizer of workshops and training courses. Since 2016, he is also a member of Croatian Academy of Sciences and Arts.