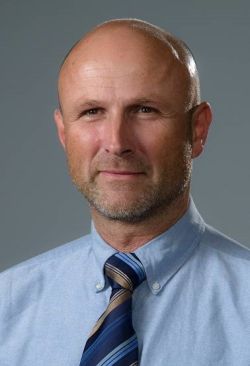 Goran Durn was born in 1962 in Zagreb, Croatia. He received PhD in geology from University of Zagreb. He is a full professor at the University of Zagreb, where he teaches at the graduate and doctoral studies of the Faculty of Mining, Geology and Petroleum Engineering and at the graduate studies of the Faculty of Forestry. He is a mentor of a large number of graduate theses, one master’s thesis and six doctoral dissertations, and a member of the committees of graduate and doctoral theses at the Faculty of Mining, Geology and Petroleum Engineering, the Faculty of Science, the Faculty of Agriculture and the Freie Univesität Berlin, Germany. He was visiting researcher at the University of Natural Resources and Applied Life Sciences, Vienna, Eötvös Lorand University, Budapest and Comenius University, Bratislava. He is interested in mineralogy, geochemistry and micromorphology of palaeosols at regional unconformities in carbonate rocks and in environmental mineralogy. He is particularly involved in investigation of clay minerals in palaeosols as sensitive indicators of the geochemical environment of pedogenesis and diagenesis and therefore can be used for palaeonvironmental and palaeoclimatic reconstructions. Recently he is also involved in investigation of natural habitat of carbapenem-resistant bacteria (soils affected by illegal waste dumps, technosols, swine manure, riverine ecosystems). He has published more than 80 scientific papers. His publications about terra rossa soils are among the most cited publications on the genesis of this type of soil in the world. He has actively participated as a leader or collaborator in ten international / bilateral projects, one FP7 project, seven domestic scientific projects and two Croatian Science Foundation projects. He is currently a leader of one project founded by the Croatian Science Foundation entitled: Western Istrian Anticline as an ideal natural laboratory for the study of the regional unconformities in carbonate rocks. He was the president or member of the scientific committee of eight international scientific conferences and a member of the organizing committee of two international scientific conferences. He is a member of the editorial board of the scientific journal Geologia Croatica and a reviewer of Geoderma, Catena, Clay Science, Applied Clay Science, Chemical Geology, Quaternary International, Quaternary Science Journal, International Journal of Speleology, Journal of Asian Earth Sciences, Geologia Carpatica, and Environmental Geology. He is a guest editor (with Martin Frechen from the Leibniz Institute for Applied Geophysics, Hannover, Germany) of a special issue of Elsevier journal Quaternary International, published in 2018 under the title Quaternary of Croatia (vol. 494). He was vice-dean for teaching and students (2001 – 2005) and dean (2005 – 2009) of the Faculty of Mining and Geology and Petroleum Engineering, president of the Croatian Clay Group (2004 – 2007), representative of the Croatian Clay Group in European Clay Groups Association (2005 – 2007) and a representative of the Croatian Geological Society in the European Federation of Geologists within the Euroages project (2007 – 2011). He is the president of the Scientific Committee for Geology (2017 – ), the Scientific Council for Nature Protection of the Croatian Academy of Sciences and Arts (2019 – ) and the National Committee of INQUA (2019 – ). He is an expert of the European Commission for the evaluation of scientific projects in geosciences and the environment. He received Croatian Academy of Sciences and Arts award for natural sciences and mathematics in 2011 and the City of Zagreb award in 2019. He was elected a Fellow of the Croatian Academy of Sciences and Arts in 2016. As an interpreter of the Croatian liaison office in the European Commission Monitoring Mission, during 1991 and 1992 he visited almost all areas affected by aggression during the war in Croatia.