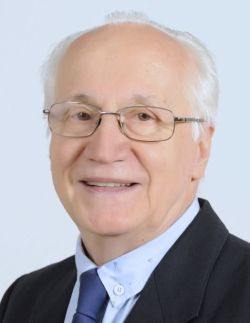 Tomislav Cvitaš was born in Zagreb in 1943. He graduated in chemistry from the Faculty of Science, University of Zagreb in 1966. After that, he joined the Rudjer Boskovic Institute and in 1967 he went on postgraduate studies in the field of molecular spectroscopy at the University of Reading in Great Britain, where he received his Doctorate in 1970, then spent one year at the University College London as a postdoctoral researcher and returned to the IRB, where he began research in the field of spectroscopy and atmospheric chemistry. At the same time he lectures in physical chemistry at the Faculty of Science (PMF) in Zagreb. From 1975 to 1977 he stayed at the Research Centre in Karlsruhe and from 1990 to 1995 at the Fraunhofer Institute for Atmospheric Research in Garmisch-Partenkirchen, where he worked on coordinating the largest scientific project for environmental research in Europe. In 1977 he moved as a full professor in permanent employment to the Department of Physical Chemistry at the Department of Chemistry of the Faculty of Science. He served as vice-dean for teaching and dean of the Faculty of Science and head of the Department of Chemistry.

He was awarded for his contribution to science and higher education with several distinguished awards and recognitions: the State Award for promotion and popularization of science in 2001; Plaque IUPAC Appreciation of service for outstanding contributions to the advancement of worldwide chemistry, 2003; The Andrija Mohorovičić Award of the University of Zagreb, a Fellow of CASA in 2012; Medal of the Department of Chemistry of the Faculty of Chemistry for contributions to scientific and teaching work in 2014 and selection in the title professor emeritus of the University of Zagreb 2015.