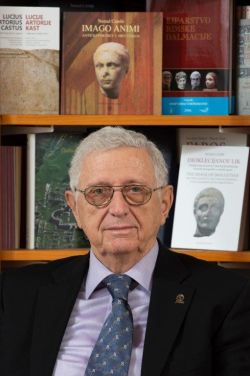 He took part in over a hundred national and international scientific meetings with papers, most of which were printed. He personally organised several scientific conferences, and edited the proceedings thereof.

Participated as associate and leader in numerous field (land and submarine) surveys. The most important field research locations: Salona, Narona, Asseria, Burnum, Zmijavci near Imotski. He is one of the pioneers of submarine archaeology in Croatia. The most important undersea investigations of protective character: Vela Svitnja and Špinut in Split, and other recognitions of protective and scientific character.

He was actively involved in the work of the Committee for monitoring conservation work on the bronze statue of the Strigilis Cleaner (the Croatian Apoxiomenos), found in the waters of Mali Lošinj. He is consultant in the conservation treatment of marble sarcophagi found in Salona in the course of the construction of the foundations for the Franjo Tuđman Bridge.

He is leader of the archaeological research and conservation of the amphitheatre and the accompanying surrounding buildings of military character, as well as Head of the permanent display of the Museum and Research Centre at the National Park in Puljani near Burnum. He is co-leader of the non-destructive archaeology research project conducted in Burnum in cooperation with the University of Bologna.

Fields of scientific activity: classical archaeology (ancient sculpture, religion and architecture) and Early Christian archaeology (architecture, sculpture and miniature art). Recently, he has been intensively engaged in the history of Late Antiquity, especially the period of tetrarchy (Diocletian and his fellow comrades).

He wrote 18 monographs and about 400 scientific and professional papers. Additionally, he produced numerous reviews and encyclopaedic units in domestic and world encyclopaedias, and newspaper articles. He published in the editions of the Croatian Academy of Sciences (several issues of the journal Archaeological Works and Discussions, and RAD of the Department of Social Sciences). In the booklet of lectures held at the Croatian Academy of Sciences, he printed a monograph entitled Should Have Diocletian, Founder of Split, Done Better in the Project of Building the Split Waterfront, Zagreb 2009.

He was Head of the scientific project conducted by the Ministry of Science and Technology, entitled Research of Ancient Construction and Art in Dalmatia (code 269-269868-0919). He mentors numerous master’s and doctoral candidates. So far, he has been mentor for 20 doctoral and 14 master’s dissertations. He has been president of the Literary Circle of Split since 1992. Engaged in cultural and scientific and publishing work (numerous scientific books have been published in the fields of literature, comparative literature, history, art history and archaeology). He has been awarded the Order of the Croatian Star with the Effigy of Marko Marulić.