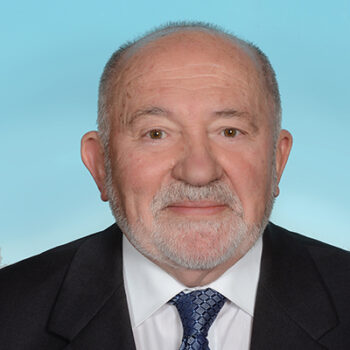 Leo Budin was born on September 26, 1937, in Vinkovci. After graduating from the 2nd Gymnasium in Zagreb, in 1956 he enrolled at the Faculty of Electrical Engineering, University of Zagreb and graduated in 1961. During his studies, as a distinguished student, he was awarded the Rector’s Award on two occasions. After graduation, he worked for a short time in the Section for Signalling devices and connections in the Community of Railway Transport Enterprises in Zagreb, and after returning from military service, in the fall of 1962 he was employed as an assistant at the Department of Electronics of the Faculty of Electrical Engineering in the University of Zagreb. In 1967 he earned an academic degree in science, and in 1976 he defended his doctoral dissertation titled Designing Systems with Uncertain Parameter Values, for which he received the Dr. Vratslav Bedjanič Award. Since 1982, he has been a full professor in the computer techniques subject group.

In 1968–69, he was a fellow of the Alexander von Humboldt Foundation, at the University of Erlangen-Nuremberg in Germany. In 1979-80, he was a visiting professor in the Department of Computer Science at the University of Illinois Urbana-Champaign in the US.
During his work at the Faculty, he was a member and president of many commissions and committees, as well as head of the Department of Electronics (now: Department of Electronics, Microelectronics, Computer and Intelligent Systems), Vice Dean and Dean of the Faculty of Electrical Engineering (now: Faculty of Electrical Engineering and Computing) and a member of various University Committees.