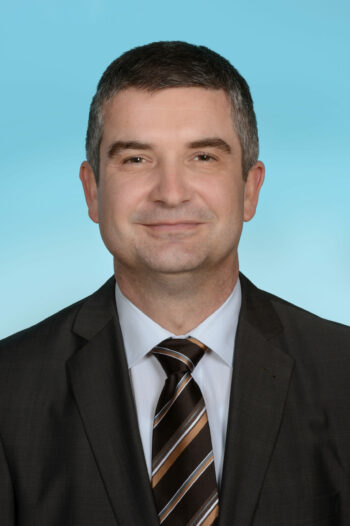 Igor Anić was born in 1967 in Knin, where he concluded his primary and secondary education. In 1992, he graduated from the Faculty of Forestry, University of Zagreb, and started working at the same Faculty as junior researcher. In 1993, he became junior assistant lecturer; in 1997, he advanced to the function of assistant lecturer; and in 2001, to senior assistant lecturer. Subsequently, he became assistant professor in 2003, and associate professor in 2007. In 2011, he was elected full professor.
In 1996, he concluded his postgraduate studies in silviculture by defending his master’s thesis entitled Regeneration and development of Narrow-leaved ash stands (Fraxinus angustifolia Vahl) in central Croatia. In 2001, he defended his doctoral dissertation entitled Natural regeneration of Narrow-leaved ash stands (Fraxinus angustifolia Vahl) in the Posavina region.
I. Anić lectures silviculture in undergraduate, graduate and postgraduate programmes at the Faculty of Forestry, University of Zagreb. He was chosen guest lecturer in silviculture at the Faculty of Forestry and Wood Technology of the Mendel University in Brno (Czech Republic) for the academic year 2004/2005.
He is the Chair of the Institute of Forest Ecology and Silviculture of the Faculty of Forestry, University of Zagreb, and the Head of the postgraduate doctoral programme in Forestry.
In the academic year 2005/2006, I. Anić was Vice-Dean for international relations of the Faculty of Forestry, University of Zagreb.
I. Anić was involved in 17 scientific projects, either as project leader or as collaborator. He participated in the work of 38 national and international scientific symposia. Furthermore, he was a member of organisational, scientific or programme boards of nine scientific symposia, out of which three were organised by the Croatian Academy of Sciences and Arts.
Full member of the Croatian Academy of Sciences and Arts since 2012. Associate member of the Academy of Forestry Sciences in the period 2005–2010; non-regular member since 2010.
In the period 2006–2011, he was leader of the working group Riparian and Coastal Ecosystems within the International Union of Forest Research Organizations (IUFRO). He is Head of the national section (Pro Silva Croatia) and a member of the Management Board of the international association Pro Silva Europe.
Member of the editorial board of the journal Šumarski list. Editor for the field of forestry in the scientific journal Glasnik za šumske pokuse between 1996 and 2006; editor-in-chief between 2006 and 2009.
I. Anić is the Head of the Division of Forestry Engineers of the Croatian Chamber of Forestry and Wood Technology Engineers.
In 2006, he was awarded the Croatian Forestry Society’s Acknowledgement for his long-lasting work to the benefit of the forestry profession.
I. Anić published – as author or co-author – more than 165 papers, out of which 93 scientific articles in scientific journals and proceedings. He was co-author in ten scientific books, monographs and manuals. He edited several scientific books, students’ books and proceedings from national and international scientific symposia. Editor-in-chief of the proceedings from two scientific symposia organised by the Croatian Academy of Sciences and Arts.
I. Anić is a member of the Croatian Forestry Society, the Croatian Society of Soil Science, the East Alpine-Dinaric Society for Plant Ecology and the Croatian Ecological Society.