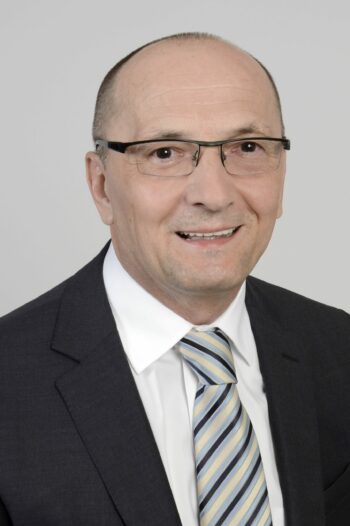 Miroslav Samaržija was born in Krasno in 1958. He graduated from the Faculty of Medicine, University of Zagreb and earned a phD degree at the age of 33. He has been educated abroad on several occasions, especially in America (Columbia University; Harvard University; NIH, Bethesda) and Austria (AKH Vienna).

Today he is a leading Croatian pulmonologist with a great international scientific and professional reputation. In his second consecutive term, he heads the leading pulmonology clinic in Croatia. He is the president and founder of the Croatian Thoracic Society. So far, he has chaired six national thoracic congresses and several elite international scientific conferences. He is a full professor of the Faculty of Medicine, University of Zagreb.

He has published more than 250 publications, of which 59 are cited in international databases, cited 440 times at the WoS base and more than 500 times at the Scopus base. He co-authored 14 books with 27 chapters. He is a researcher in ten scientific projects at home and abroad, and is the holder of one patent.

He has made a notable and original scientific and professional contribution in research into diseases of pulmonary circulation, lung cancer, chronic obstructive pulmonary disease and lung transplantation. He has given more than two dozen invited lectures at respected universities abroad and at international meetings. He introduced several new teaching facilities at the School of Medicine.

He received international and domestic awards for his scientific and professional work, including the Rector’s Award of the University of Zagreb, the City of Zagreb Award, and the Order of Danica Hrvatska medal with the image of Katarina Zrinska.

He is a member of 12 Croatian, European and American professional societies. He is a member of the Central Ethics Committee of the Ministry of Health, the Ethics Committee of the Faculty of Medicine in Zagreb, and the national coordinator for specialization in pulmonology. He is the head of specialist postgraduate studies in pulmonology at the Faculty of Medicine in Zagreb. He is the founder and manager of the Croatian Breathing House Foundation and the founder of the lung transplant program in Croatia.

His work so far has made a great and recognizable personal contribution to Croatian medicine and medical sciences. He has been a full member of the Croatian Academy of Sciences and Arts since 2016 in the Department of Medical Sciences.