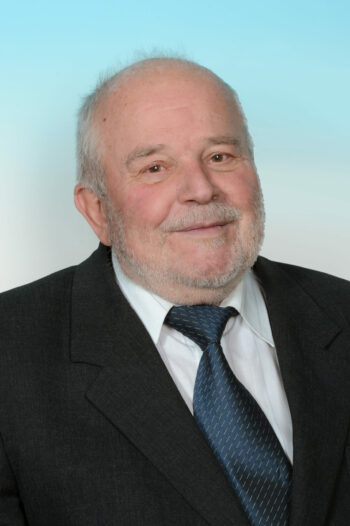 Ivan Gušić was born on November 17, 1938, in Zagreb, Croatia (in former Yugoslavia). He obtained his B.Sc. in 1962, M.Sc. in 1968, and Ph.D. (Geology) in 1974, all at the Faculty of Science, University of Zagreb. In 1963, he was employed as Assistant, in 1972 as Assistant Professor, and in 1977 as Associate Professor at the Department of Geology of the same Faculty. He spent the period 1977-1980 in Germany on an Alexander-von-Humboldt-Fellowship and from 1981 to 1985 was employed as an “aussenplanmässiger Wissenschaftler” at the Institute of Geology and Palaeontology of the University of Münster, Germany. He returned to Zagreb in 1985 to be employed at the Croatian Geological Survey (CGS; the Institute of Geological Research) and in 1990 he again moved to the Faculty of Science of the Zagreb University, as Full Professor and stayed until retirement. In 2012, he was named Professor Emeritus of the University of Zagreb.

His main research topic is (or was!) the Mesozoic stratigraphy of the then Adriatic Carbonate Platform (ACP), that subsequently, during the last 55-60 M.y., gave birth to the present-day Dinaric Mountain range. In correlating the events on the ACP with the global eustatic and geotectonic events, as well as with other peri-Mediterranean carbonate platforms, he and Vladimir Jelaska established the Upper Cretaceous event stratigraphy of the ACP within the global framework, which later became known, at least in Slovenia and other parts of the former Yugoslavia, as the “Brač model”. A minor portion of his research was devoted also to the Interior Dinarides, including also Bosnia and Herzegovina. In the early days of his career, as a micropalentologist, he studied taxonomy, biostratigraphy and palaeoecology of the larger benthic foraminifera and calcareous algae (Dasycladales). He didn’t particularly excel at establishing numerous new taxa, but those that he did establish proved to be reliable index-fossils (biostratigraphic markers) not only for the ACP but also for the whole Tethys area and as such have been included, or even elevated to higher taxonomic rank, in several globally used professional reference books (manuals). Altogether, Gušić (alone and/or with co-authors) published about 80 articles in international peer-reviewed journals. More recently, Gušić is a member of the so-called Neanderthal-consortium, led by Svante Pääbo in Leipzig, where he provided the access to the Neanderthal bones from the Vindija Cave in Croatia, which proved to be critical in reconstructing the Neanderthal DNA. The results of that collective (many-authored) research have been published in Nature, Science, Cell and similar high-ranking journals and have so far amassed over 2500 citations,

In later years Gušić devoted himself to publishing popular (and not so popular) articles and books promoting evolution (and the theory of evolution) and combating creationism and intelligent design, which is, in present-day Croatia, unfortunately, a badly needed activity.

From 1992 Gušić is Full Member of the Croatian Academy of Sciences and Arts, where, from 2011 to 2018, he was Head of its Section of Natural Sciences. In 1992 he was awarded, jointly with Vladimir Jelaska, the Rugjer Bošković Prize, and in 2012 he received the Croatian State prize for life achievement in the natural sciences.