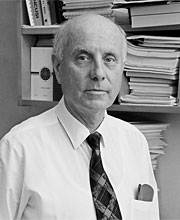 He completed his undergraduate studies in 1958 at the Faculty of Natural Sciences in Ljubljana and received a PhD a year later. He then started post-doc study at the Massachusetts Institute of Technology. When he returned to Slovenia, he continued his work at the Jožef Stefan Institute. He became a professor at the University of Ljubljana in 1970.

Professor Blinc was one of the founders of uses of nuclear magnetic resonance for investigations of phase transitions and liquid crystals. He established NMR/EPR spectroscopy in Slovenia (his first paper on the subject was published in early 1958) and was the head of the Condensed Matter Physics Deparment at the the Jožef Stefan Institute. He was the president of AMPERE Groupement for two mandates during 1990–1996. He was a member of the Slovenian Academy of Sciences and Arts and served as its vice president from October 2, 1980 to May 6, 1999. He was also a member of the European Academy of Sciences and Arts and an honorary member of the Society of Mathematicians, Physicists and Astronomers of Slovenia.

From: Wikipedia, the free encyclopedia